Home > Artikelen > Are Green cities a possibility in MENA?

Are Green cities a possibility in MENA?

Cairo is experiencing a population boom, with more than 20 million people crowding into a city that continues to expand. People keep adding floors to dense informal constructions in the centre, while the government builds sprawling new development projects in the desert. The metropolis is just one example of the rapid urbanisation that takes place in the MENA region today. As MENA countries become more urbanized, what are the possibilities for sustainable cities? That is the question a panel hosted by het Grote Midden Oosten platform delved into. Less talk and more action seems to be key, in other words: increasing capacity and funding for sustainable initiatives, and crucially, listening to the inhabitants who shape the city.

‘Cities definitely have a transformative power’, says Karim Elgendy, a sustainability consultant and architect based in London and founder and coordinator of Carboun, an advocacy initiative promoting sustainability in Middle East cities. ‘We could even go as far as to call MENA an urban region, since two-thirds of the population live in cities, which is more than the Asian or African average. It’s not the same as Europe and North America, but it’s pretty high. This is positive because cities are central to economic development. Recent data show that in regional capitals the average GDP per capita is twice as high as the national average.  It is also where more than sixty percent of energy is consumed, more than sixty percent of products and services are consumed and cities are responsible for half of the carbon emissions. As they are most highly impacted to climate change, in theory these regional capitals are a solid point of departure for greening efforts.’

But there are multiple challenges in the MENA region. The New Leipzig Charter (2020) outlines a policy framework for sustainable urban development enabling compact, dense, socially and economically mixed cities. However, despite parts of Middle Eastern cities being incredibly dense, the density of cities in the MENA region overall is still low, says Elgendy. UN habitat recommends a density of 15,000 persons per square km, and Middle Eastern cities are within a range of 1,200-25,000 people per square kilometre. But rather than becoming denser, cities in MENA are actually becoming more thinly populated, losing 1.5 percent density per year. ‘This is bad from an environmental point of view,’ says Elgendy. ‘Not only do buildings need to be cooled and heated separately, they also make public infrastructure more of a challenge. More thinly populated cities are designed for cars and private vehicles. The fact that many MENA countries subsidise both electricity and fuel create little incentive for planners and consumers to use these resources more efficiently.’

Such expansion is most acute in Cairo, which is sprawling by more than six percent every year. The past few decades, central planning authorities have decided to construct desert cities. As the image below shows, ring roads have been built. As a result, desert land adjacent to these roads is already becoming more valuable according to Sonja Spruit, a Cairo-based architect specialized in affordable housing and social infrastructure. ‘The temptation will be extremely large to expand even more’, she says. Yet despite this high degree of formal planning, there is also a great deal of informal construction happening in the Egyptian capital. 65 percent of Cairo’s population, for example, lives in informal areas, often dense high-rise close to the city centre. Elgendy feels cities are undermined by this informality. Spruit notes that they reveal the needs of the population. ‘People will do what makes sense for them. Very often planners are quite far off the mark’, she says. For example, Cairo has developed public housing in its new desert towns such as Sixth of October city. ‘This development is very far from the centre of Cario, 37.4 km from Tahrir, 14.9 km from planned monorail that doesn’t exist yet and 23.6 km from planned metro line that doesn’t exist yet, and metro lines take a very long time to implement’, Spruit says. ‘If this is supposed to target low-income households, how can they live here? It’s impossible.’ According to Spruit, people chose to move to informal areas in the city and villages much closer to Cairo, which are well-connected to the city through minibuses. ‘This is a logical step. There is some wisdom to necessity. Any solution we come up with should be one that a country wants to execute because it makes so much sense.’

In addition to finding the right solutions, the question also remains whether or not cities have the capacity to realise transformation, says Elgendy.  Some cities lack legislative and executive municipal power; they are often not allowed to manage their main urban systems, like energy, water and mobility, he says. This can make it difficult to install, for example, solar panels on private rooftops, even though solar projects on a national scale, for example on the rooftops of ministries, are possible. ‘Cities’ powers are relegated to planning affairs, whether they can issue land use planning or building permits, and even in that field they lack public engagement in the planning process’, Elgendy says.

This is where significant room for improvement lies. ‘There is poor involvement on planning issues. Planning happens in planning offices’, Elgendy says. ‘There is zero engagement at the moment.  Those designing new cities or changes should engage not just developers and planners, but also potential citizens, and, if present, civil society. Any improvement on that front would be good, because the baseline is zero.’

Spruit, too, feels input from residents is key to achieving sustainable solutions. ‘My advice would be for cities to work on solutions that people can easily implement’, she says. ‘If we think of fundamentally transforming cities, we have to think of solutions that are not cosmetic, but that are directly applicable, attractive and practical and that could be implemented en masse. Otherwise they remain a cherry on top of a pie, but nothing structural’  It is essential to use the people that live in the city, those that shape it. ‘There can be transformation, people are smart’, she says, pointing to residents in the Syrian town of Binnish, who, due to the civil war, are no longer connected to the electricity grid and have therefore installed solar panels on their roof. ‘But if we want to help in any way, we must be with the people and latch on to that smartness.’

The most dense parts of Cairo are actually in line with the recommendations of the Leipzig charter in terms of density, Spruit says. Yet it is the areas that are officially planned that are most fundamentally and structurally unsustainable, she adds. The water that will feed into the planned parks in the new desert areas will have to be pumped 400 meters, or from the Nile or from the Red Sea, which means it would have to be desalinated. ‘In essence, to build in the desert is unsustainable’, she adds. ‘And to do it on such a large scale, and such a low density…. 91 percent of 20 million people live in the dense part of central Cairo. Hardly anybody lives in these new areas where all the investment goes.’ And this is irreversible. Once something has been built, you’re usually stuck with it, for better or worse. Any effort to make cities more sustainable has to work with past realities, and with how cities have developed over time, Elgendy and Spruit agree. ‘There is effectively a ceiling on sustainability. Once a plan is made, once a city is built the way it is built, it is very hard to fix it’, says Elgendy. There is therefore and enormous responsibility on those who plan cities or city extensions. ‘They can lock in decades of emission and environmental footprint. People aren’t sufficiently aware of that.”

Role of the EU

The EU has a role to play in helping the MENA region become greener and is already working with local authorities in countries around the Mediterranean. They have made 30 climate action plans in close cooperation with these local authorities and are planning to make 100 more, Spruit says.

And indeed there are some positive developments, according to Elgendy. Amman plans to reduce 40 percent of its carbon emissions by 2030 and to reach near zero by 2050 by increasuing the number of green buildings, installing rooftop solar panels and stimulating both renewable energy and public transportation use. Algiers, Dubai, Doha and Fez are all making efforts to become more green.

‘Cities in MENA could learn from each other and from European countries around the Mediterranean,’ Elgendy says. Sadly, most are not involved in the city networks or peer-to-peer networks. In the rare cases they are, they are not focused on the environment.’

Collaboration works, Elgendy says, pointing to Chefchaouen, a town in Morocco that has managed to work with Mediterranean support networks to create an energy action plan as well as some other minor developments. ‘This demonstrates the power of learning through peer-to-peer discussion of technical issues, rather than getting bogged down in the national politics.’

Due to the large degree of central planning, Elgendy feels green initiatives should best avoid capital cities for now, due to the contentious power politics that come into play once capitals are involved. But, Spruit warns, smaller cities will also have less budget, and need more support. And at the end of the day, she says, it’s crucial that plans created through networks are implemented.

Working together between Europe and the region has been going on for decades, ‘but often good advice ends up in a drawer in a desk.’ Now, pilot programmes need to be executed, ‘to act as an inspiration and proof that the solutions are feasible and affordable and attractive.’ This requires political will to support such initiatives, and budget as well. ‘You can’t just talk to get things done. We need people to spend time and sweat.’

A recording of the online event can be watched here: 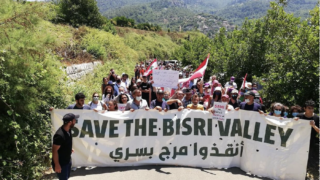 The little Lebanese valley that could: environmentalists taunting a corrupt system

When the seed knows the soil: a Palestinian story about resilience and food 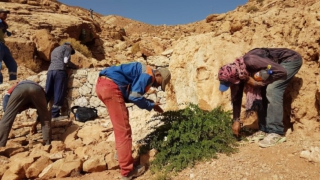